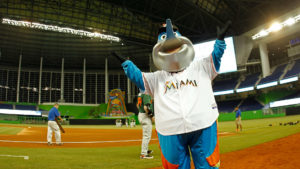 The Miami Marlins professional baseball club has received bad press recently due to national and local media reports of them suing a long-time season ticket holder, Mickey Axelband, over $24,300 for two season tickets. Axelband allegedly walked away from a ticket contract with the Marlins due to allegedly false misrepresentations about amenities that were given but subsequently taken away from Axelband and other premium seat season ticket holders by the team. After being defaulted by the court clerk, the Marlins super-fan Axelband “lawyered up” and filed a motion to dismiss and also served some extensive financial discovery on the Marlins which should send that case down the long, windy path to settlement.

In addition to suing a “super-fan”, the Marlins have sued stadium vendors for breach of contract including a lawsuit styled Marlins Stadium Operator, LLC v. Sir Pizza Franchising et al., Case No. 15-020790-CA-01 in Miami-Dade County Circuit Court. This lawsuit involves claims by the Marlins against a Sir Pizza franchisee and the franchisor (among other Sir Pizza corporate entities).  The franchisee, Rene Prats, allegedly signed a $2.5 million dollar advertising deal with the Marlins to be the exclusive pizza vendor at the ballpark through the 2021 season. Prats has since filed a Suggestion of Bankruptcy notifying the court that he has filed for bankruptcy protection.

Knowing Prats is judgment-proof, the Marlins have turned the focus on the franchisor. The Marlins’ Complaint alleges that “upon information and belief” Sir Pizza Franchising, Inc. does business as an unregistered, non-entity called “South Florida Co-op” which was allegedly a party to the Marlins sponsorship contract.

Because of this purported relationship, the Marlins allege that the Sir Pizza franchisor should be liable for the money allegedly owed by Prats.  The Complaint (Marlins v. Sir Pizza Complaint) makes broad allegations that all “Defendants” (including the franchisor and its international corporate arm) are parties to the contract.

For reasons that include a failure to allege sufficient facts and failure to adequately plead separate allegations (which are both proper bases for dismissal under the Florida Rules of Civil Procedure), counsel for Sir Pizza Franchising, Inc. has moved to dismiss the Marlins’ lawsuit (Marlins v. Sir Pizza Motion to Dismiss).

In this day and age, it is rather common for plaintiffs suing a franchisee to also include the franchisor as a party defendant. Often, the franchisee is not collectible (or in this case bankrupt) so a franchisor is brought in on what is usually an apparent agency theory to try to get to the “deeper pockets.”

Florida has case law precedent for this scenario where a franchisor has been sued merely for being the franchisor.  In Jackson Hewitt, Inc. v. Kaman, 100 So. 3d 19 (Fla. Dist. Ct. App. 2011), the court held that “the mere display by the franchisee of the franchisor’s trademark and logo, or the sale of the franchisor’s products, does not constitute a representation sufficient to create an apparent agency.”

The plaintiffs had lost a substantial sum of money in a fraudulent real estate investment promoted by franchisees of Jackson Hewitt, Inc. By the time the plaintiffs learned the investment was lost, the franchisee was “judgment-proof” so the court acknowledged the plaintiffs were “understandably look[ing] for a deeper pocket.”

In today’s world, it is well understood that the mere use of franchise logos and related advertisements does not necessarily indicate that the franchisor has actual or apparent control over any substantial aspect of the franchisee’s business or employment decisions. Nor does the provision of routine contractual support services refute this conclusion.

The Marlins legal theory against Sir Pizza Franchising, Inc. is a quasi “alter ego” theory, and there are no allegations of an agency relationship. What is clear, however, is that the Marlins are going after the “deep” pocket of the franchisor merely because it is the franchisor. Based on precedent in Florida, it is probable that this case will end up being solely against a now-bankrupt franchisee at the end of the day.

Adam G. Wasch is a franchise and business lawyer and co-founder of the law firm Wasch Raines LLP in Boca Raton, Florida.  Mr. Wasch regularly represents franchisors and franchisees in a variety of industries (including pizza restaurants) and heads up the firm’s franchise litigation practice. He is also a former Minor League Baseball front office employee and a die-hard Marlins fan who was at Opening Day in 1993, at every playoff and World Series game in 1997, and at Opening Day of the Marlins Ballpark in 2012. He luckily does not owe the Marlins any money to his knowledge.

Wasch Raines LLP is a franchise and business law firm providing a comprehensive range of services to emerging and established businesses and franchise companies in a variety of industries. Through its unique business model, the firm offers its clients the benefits of having a cost-efficient in-house general counsel and a full service litigation team. For more information, click here to contact us or call (561) 693-3221.